Photochromic materials can reversibly change their color and optical properties when irradiated with ultraviolet or visible light. However, they are made from organic compounds that are expensive to synthesize. Fortunately, for the first time, scientists from Ritsumeikan University, Japan, have discovered fast-switching photochromism in an inexpensive inorganic material: copper-doped zinc sulfide nanocrystals. Their results pave the way for a plethora of potential applications ranging from smart adaptive windows and sunglasses to anti-counterfeiting agents. 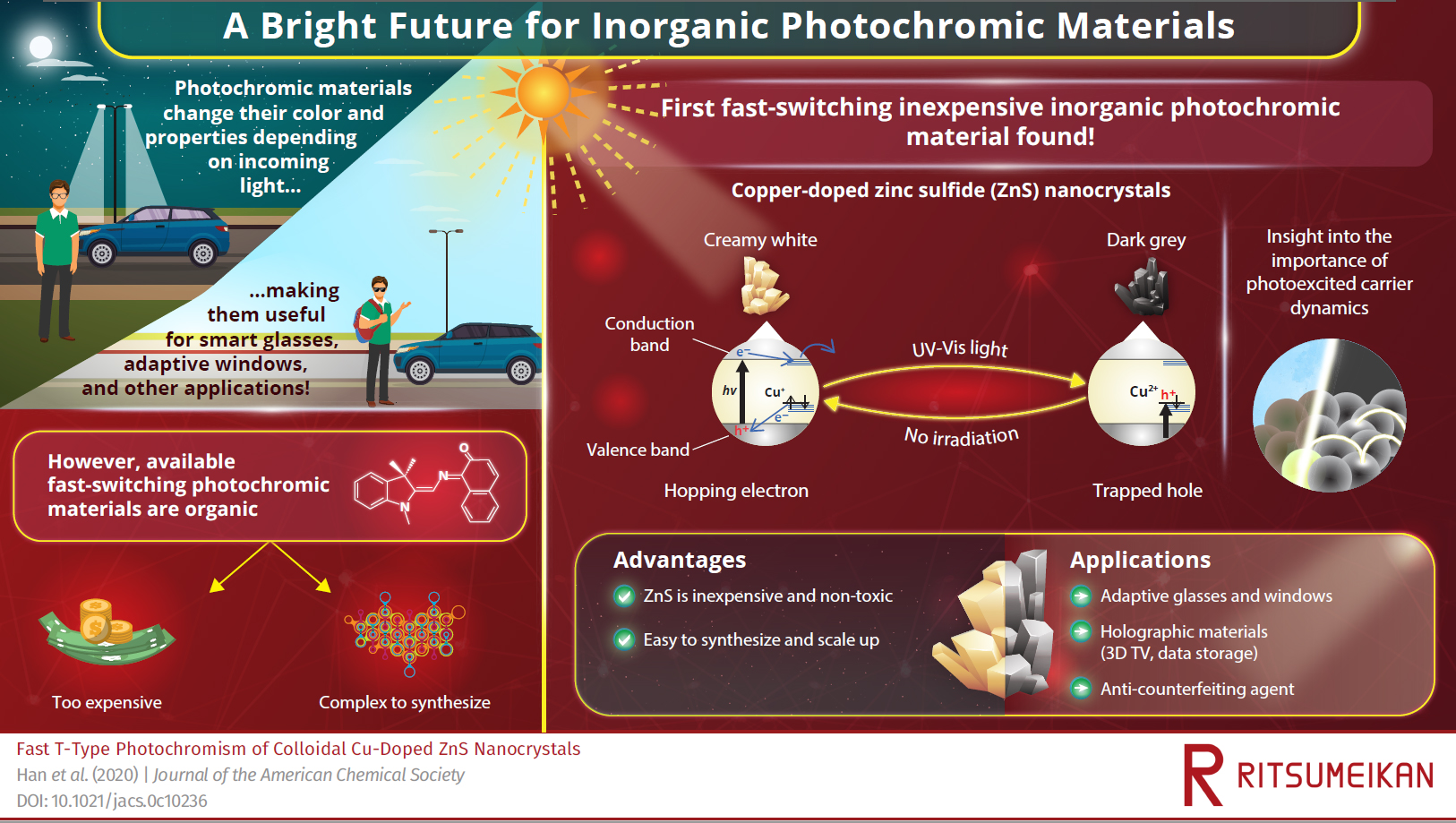 Isn’t it convenient when office building windows adaptively darken according to the intensity of sunlight? Or when standard glasses turn into sunglasses under the sun and switch back as you enter a building? Such feats are possible thanks to photochromic materials, whose optical (and other) properties change radically when irradiated by visible or ultraviolet light.


Today, virtually all fast-switching photochromic materials are made using organic compounds. Unfortunately, this makes them considerably expensive and complex to synthesize, requiring multi-step processes that are difficult to scale up for mass production. So, despite the myriad of potential applications these materials could enable, their commercial application has been limited. Finding fast-switching inorganic photochromic materials, which could make those potential applications widely commercially possible, has proven challenging. However, a new study published in the Journal of the American Society brings new hope in this field.


In this study, a team of scientists from Ritsumeikan University, Japan, led by Associate Professor Yoichi Kobayashi, discovered that zinc sulfide (ZnS) nanocrystals doped with copper (Cu) ions have peculiar photochromic properties. When irradiated by ultraviolet and visible (UV-Vis) light, these crystals turn from creamy white to dark grey. What’s especially interesting is that when the radiation source is turned off, it takes around a full minute for the material to revert to its original creamy white color in air, but it does so in the scale of microseconds when submerged in aqueous solutions. The team proceeded to theoretically and experimentally analyze this material, determined to clarify the intricacies of its never-seen-before photochromatic behavior.


But why do Cu-doped ZnS nanocrystals change color when irradiated by light, and why can it take long for them to return to their original color? The answer, as the scientists proved, has much to do with the dynamics of photoexcited charge carriers. When a photon hits a material, the collision can energize electrons and cause them to leave their otherwise stable positions in their molecular orbitals. The absence of the electron leaves a localized positive charge that, in solid-state physics, is referred to as a ‘hole.’


In most materials, the electron–hole pair exists for a very short time before cancelling each other out, re-emitting a fraction of the energy that the electron originally obtained. However, in Cu-doped ZnS, the picture is very different. Holes are effectively trapped by Cu ions while photoexcited electrons can freely hop to other molecules, and these effects delay the recombination process. As the team demonstrated, the long-lived holes alter the optical properties of the material, causing the observed photochromatic effect.


The discovery of the first inorganic nanocrystal to exhibit fast-switching photochromism represents much needed progress in this field, especially for practical applications. “Zinc sulfide is relatively non-toxic and can be easily synthesized at low cost,” comments Kobayashi. “We believe our research will lead to the widespread use of fast-response photochromic materials in society.” Examples of notable applications for such photochromic materials include 3D television, smart glasses, windows for vehicles and houses, and even high-speed holographic storage. They could also be used as advanced anti-counterfeiting agents for important brands and medicines.


In addition, this study has implications for researchers who are willing to dig deeper into other areas of applied optical physics. In this regard, Kobayashi remarks: “We have demonstrated that the photochromic reaction of nanomaterials can be tuned by controlling the lifetime of photoexcited carriers. Exploring novel nanomaterials with ultralong-lived excited carriers is important not only for photochromic materials, but also for various advanced photofunctional materials, such as luminescent materials and photocatalysts.”


Let us hope this study paves the way for photochromism to reach our daily lives and help make our futures (adaptively) brighter!

Established in 1869 with a spirit of liberalism and internationalism, Ritsumeikan University is one of the top-ranking universities in Japan; it was the first to be rated by Quacquarelli Symonds. The university now counts with three main campuses in Kyoto, Shiga and Osaka and boasts over 36,000 students. It is the No. 1 recommended destination for exchange students and even offers the opportunity to earn some degrees entirely in English. Its educational philosophy is based around peace and democracy, and the university strives to face the current era of rapid changes with a rich diversity of people and ideas.

Yoichi Kobayashi graduated from Kwansei Gakuin University, Japan, in 2007, where he also obtained a PhD degree in 2011. He worked for the Japan Society for the Promotion of Science at the University of Toronto, Canada, and Aoyama Gakuin University for several years before joining Ritsumeikan University as an Associate Professor in 2017. He now leads a research group in the Photofunctional Physical Chemistry Lab, where they conduct cutting-edge studies on photochromism, optical nanostructures and nanoparticles, photophysics, and photochemistry. He has published over 50 peer-reviewed papers.