By studying ancient meteorite fragments, scientists can gain important insights into how our solar system formed eons ago. Now, in a new study, researchers have discovered carbon dioxide-rich liquid water inside a meteorite from an asteroid that formed 4.6 billion years ago. This finding suggests that the meteorite’s parent asteroid formed beyond Jupiter’s orbit before being transported into the inner solar system and provides key evidence for the dynamics of the Solar System’s formation. 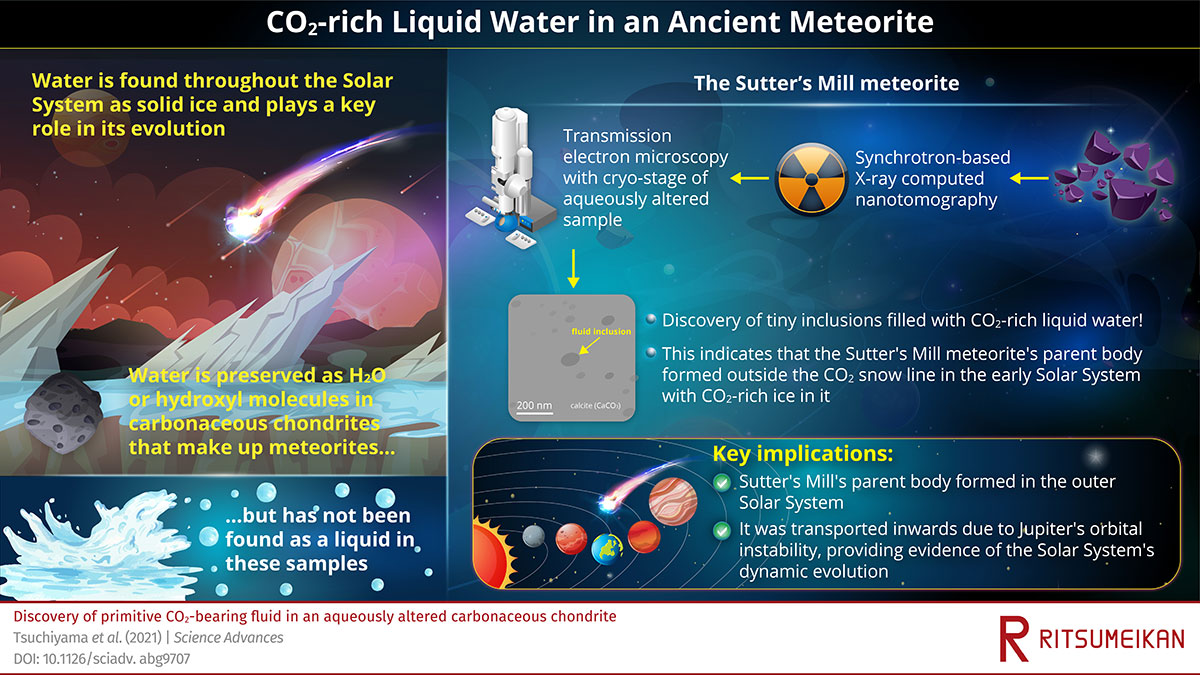 Water is abundant in our solar system. Even outside of our own planet, scientists have detected ice on the moon, in Saturn’s rings and in comets, liquid water on Mars and under the surface of Saturn’s moon Enceladus, and traces of water vapor in the scorching atmosphere of Venus. Studies have shown that water played an important role in the early evolution and formation of the solar system. To learn more about this role, planetary scientists have searched for evidence of liquid water in extraterrestrial materials such as meteorites, most of which originate from asteroids that formed in the early history of the solar system.


Scientists have even found water as hydroxyls and molecules in meteorites in the context of hydrous minerals, which are basically solids with some ionic or molecular water incorporated within them. Dr. Akira Tsuchiyama, Visiting Research Professor at Ritsumeikan University, says, “Scientists further expect that liquid water should remain as fluid inclusions in minerals that precipitated in aqueous fluid” (or, to put it simply, formed from drops of water that contained various other things dissolved inside them). Scientists have found such liquid water inclusions inside salt crystals located within a class of meteorites known as ordinary chondrites, which represent the vast majority of all meteorites found on Earth though the salt actually originated from other, more primitive parent objects.


Prof. Tsuchiyama and his colleagues wanted to know whether liquid water inclusions are present in a form of calcium carbonate known as calcite within a class of meteorites known as “carbonaceous chondrites”, which come from asteroids that formed very early in the history of the solar system. They therefore examined samples of the Sutter’s Mill meteorite, a carbonaceous chondrite originating in an asteroid that formed 4.6 billion years ago. The results of their investigation, led by Prof. Tsuchiyama, appear in an article recently published in the prestigious journal Science Advances.


The researchers used advanced microscopy techniques to examine the Sutter’s Mill meteorite fragments, and they found a calcite crystal containing a nanoscale aqueous fluid inclusion that contains at least 15% carbon dioxide. This finding confirms that calcite crystals in ancient carbonaceous chondrites can indeed contain not only liquid water, but also carbon dioxide.


The presence of liquid water inclusions within the Sutter’s Mill meteorite has interesting implications concerning the origins of the meteorite’s parent asteroid and the early history of the solar system. The inclusions likely occurred due to the parent asteroid forming with bits of frozen water and carbon dioxide inside of it. This would require the asteroid to have formed in a part of the solar system cold enough for water and carbon dioxide to freeze, and these conditions would place the site of formation far outside of Earth’s orbit, likely beyond even the orbit of Jupiter. The asteroid must then have been transported to the inner regions of the solar system where fragments could later collide with the planet Earth. This assumption is consistent with recent theoretical studies of the solar system’s evolution that suggest that asteroids rich in small, volatile molecules like water and carbon dioxide formed beyond Jupiter’s orbit before being transported to areas closer to the sun. The most likely cause of the asteroid’s transportation into the inner solar system would be the gravitational effects of the planet Jupiter and its migration.


In conclusion, the discovery of water inclusions within a carbonaceous chondrite meteorite from the early history of the solar system is an important achievement for planetary science. Prof. Tsuchiyama proudly notes, “This achievement shows that our team could detect a tiny fluid trapped in a mineral 4.6 billion years ago.”


By obtaining chemical snapshots of an ancient meteorite’s contents, his team’s work can provide important insights into processes at work in the solar system’s early history. 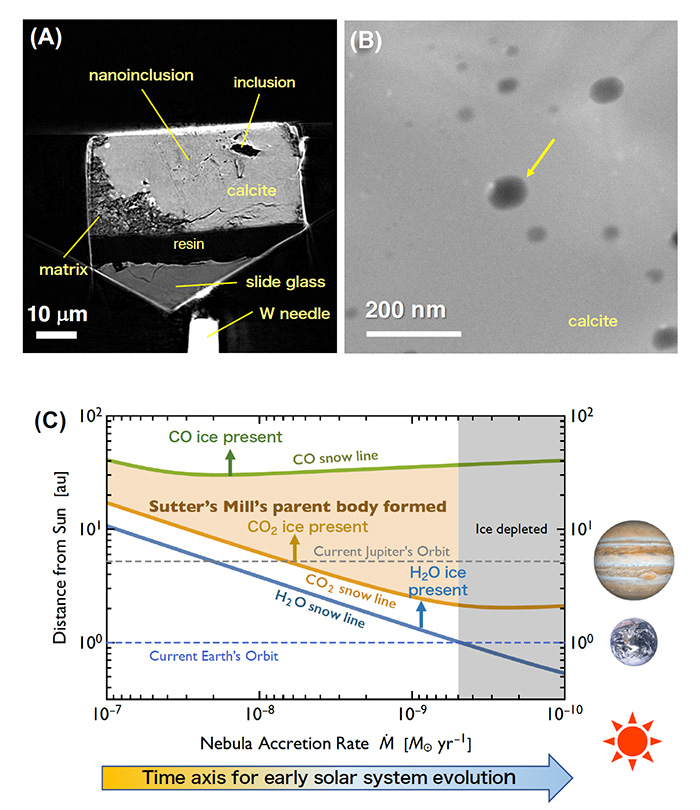 (A) Inclusions in a calcite grain in the Sutter’s Mill meteorite recognized by X-ray nanotomography. Fluids were not detected in relatively large inclusions as they had already escaped. (B) TEM image of a noninclusion filled with CO2-bearing fluid (indicated by arrow). (C) H2O, CO2, and CO snow lines and Sutter’s Mill parent body formation. The formation region can be estimated from the presence of the CO2-bearing fluid. Nebular accretion rate, Ṁ, corresponds to the time axis for the evolution of the early solar system.

Established in 1869 with a spirit of liberalism and internationalism, Ritsumeikan University is one of the top-ranking universities in Japan; it was the first to be rated by Quacquarelli Symonds. The university now counts with three main campuses in Kyoto, Shiga and Osaka and boasts over 36,000 students. It is the No. 1 recommended destination for exchange students and even offers the opportunity to earn some degrees entirely in English. Its educational philosophy is based around peace and democracy, and the university strives to face the current era of rapid changes with a rich diversity of people and ideas.

Akira Tsuchiyama, PhD, completed his doctorate at Tokyo University in 1982, and underwent postdoctoral training at the NASA Johnson Space Center and the University of Oregon. He has worked as a professor at Kyoto University, Osaka University, and the Guangzhou Institute of Geochemistry. He is a Visiting Professor at Ritsumeikan University. As a Principal Investigator, Prof. Tsuchiyama has worked on the initial analysis of the asteroid samples brought back by JAXA's Hayabusa spacecraft and will also participate in the initial analysis of the Hayabusa 2 samples.
His chief research interests are the origins and evolution of primitive solar system materials.

This study was supported by the Japan Society for the Promotion of Science, the Chinese Academy of Sciences President’s International Fellowship Initiative, and the NASA Emerging Worlds Program.